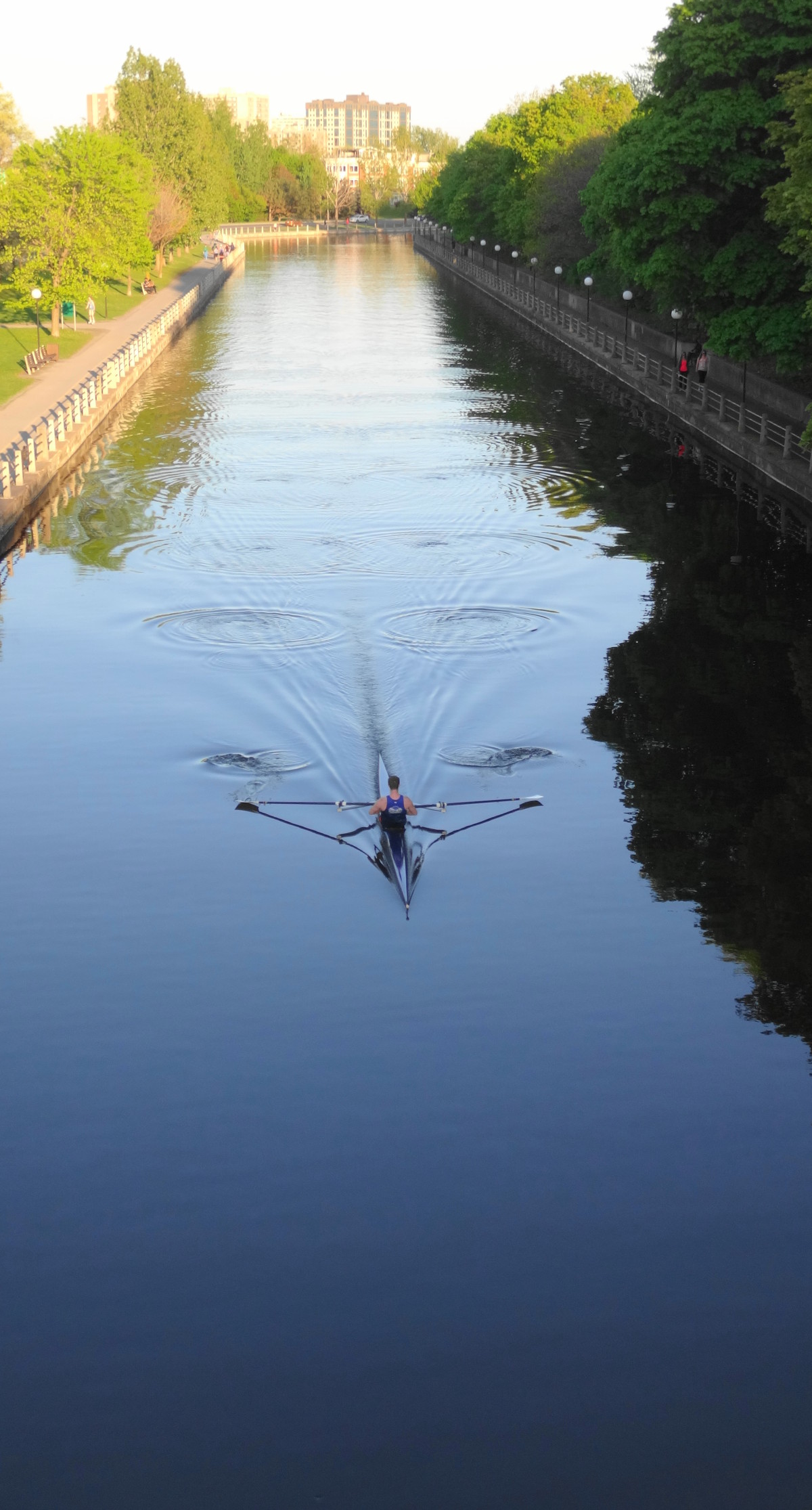 I woke to a quiet morning.  Slowing working out the kinks in my back and neck, I wriggled out of my sleeping bag and dressed as quietly as possible in the twilight of the tent.  Thomas stirred and asked about the time.  I told him that it was early, and that he could sleep longer if he wished.  He pulled himself deeper into his bag.

The air felt mild but damp when I crawled from the tent.  I picked up my shoes from outside, gave them a quick shake, and then padded barefoot across the pine needles to the logs by last night’s fire, where I slipped the shoes on.  Night lingered under the trees, but on the river I could see the first blush of morning.  I walked softly down to the canoe landing, careful not to disturb the beavers that I could hear munching on pickerelweed and lily pads up and down the shore.  No birds sang, not even the barred owl that had hooted periodically in the distance throughout the night.  Downriver, the trees stood darkly along the shore, silhouetted against a sky that shaded from navy blue through ochre to umber.

I stayed on the shoreline for an hour watching the dawn.  As the sky slowly lightened, its muted reflections became more distinct on the still water.  Mist loitered over the marsh downriver, lifting sometimes like a ghost to drift across the stream.  Upriver, the sky and landscape emerged more slowly from darkness, passing through a period of intense blue.  Autumn colors began to spread along the shoreline, like watercolors seeping along the fibers of handmade paper.  Around me in the trees and across the river, nuthatches and chickadees started to call, while red squirrels and chipmunks commenced their squabbles and chatter.  Just before sunrise, I called Thomas from the tent and, together, we watched the sun spill across the river to ignite the golds and oranges of the autumn foliage.

We only had one night in Algonquin Park.  Sue dropped Tom and me at Squirrel Rapids about 10 AM on Saturday morning, where a canoe from Algonquin Bound waited for us.  We didn’t need to paddle far, just 500 m up the river to the lower portage, and then another 500 m or so to the second campsite, which I hoped would be free.  It was.  We landed, set up camp, made some lunch, and then enjoyed a lazy afternoon of fishing.

I’d chosen this particular campsite for several reasons.  It lay on a small point, with wonderful views up and down the river.  It sheltered under a canopy of towering white pines and cedars.  It seemed the most isolated of the campsites.  But most important, it lay immediately upstream of a marsh where Tom and I had caught several large bass on a daytrip to the canyon two years earlier.  On this occasion, however, the bass ignored us.  We worked several types of powerbait along the weed edge, and even tried a spinnerbait — but without success.  Nonetheless, we soaked up the sunshine and the record high temperatures, and returned to our campsite at suppertime tired and content.

After supper, we went for a short, evening canoe up the river.  The sun set more quickly than we expected, so we turned around short of the canyon.  Beavers began to emerge along the shoreline, and as we crossed the path of one, he slapped the water hard with his tail in warning.  A flight of ducks whistled high overhead.  Blue jays called in the woods.  A planet began to glow bright in the sky, and the waxing moon appeared bright above the river.  We returned to our camp, lit a fire, and spent two mystical hours tending the flames and considering the embers, before slipping into the tent and our sleeping bags.

The next day, after the magical sunrise, we ate a leisurely breakfast amidst the chatter of the forest.  Chipmunks foraged around the campsite, hoping for a taste of oatmeal or hot chocolate.  A red squirrel suddenly burst into angry denunciation, and we looked up to see a pine marten peering around the trunk of a pine tree.  A pileated woodpecker cackled across the river.  Finally, reluctantly, we packed up our campsite, loaded the canoe, and made the short trip back down the river to the put-in, where Sue and Ben soon arrived to pick us up.