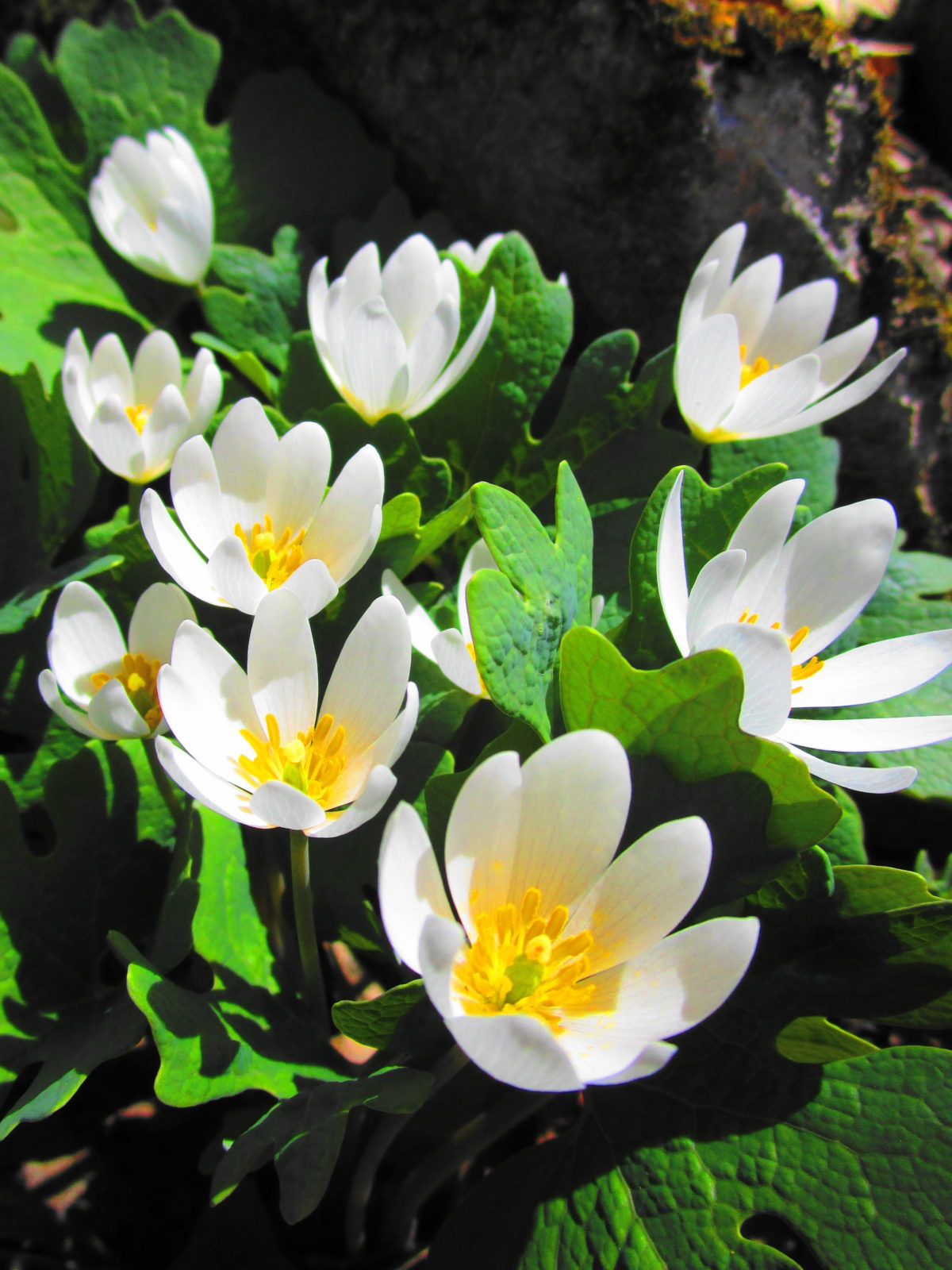 With a brief, sunny break in Ottawa’s wet spring weather, I headed out early on an April Saturday morning for a bird watching trip to the west end of the City.  I set out just before dawn on my bike, crossed downtown along the Laurier bike lane, then cut down to the Ottawa River bike path by the War Museum.  Almost immediately I stopped to watch several rough-winged swallows feeding over the channel by Albert Island, darting occasionally into the drainage holes in the concrete channel walls.

Carrying on, I quickly arrived at Lemieux Island, where I stopped to check out the colonies of ring-billed gulls on the smaller islands.  A brown thrasher chattered in a copse of trees at the entrance of the causeway, and white-throated sparrows moved through the underbrush.  Robins foraged in the grass.  A cardinal sang in the sumac on the other side of the lane, and red-winged blackbirds piped all along the shoreline.  Out at the lookout, I spotted a black-crowned night heron perched amidst the gulls, and the black spikes of cormorants on the furthest island.  A large flock of tree swallows hunted over the swift, roiling river.

Leaving the island, I continued west along the river, checking off puddle ducks and diving ducks, until just before Mud Lake at Britannia, where a gull carcass caught my eye.  Lying beside the path, all that remained of it were the two wings and a scraps of bones.  I immediately thought of a description from J.A. Baker’s beautiful masterpiece of natural history, The Peregrine.

“A peregine kill can be easily recognized.  The framework of a bird is left on its back, with the wings untouched and still attached to the body by the shoulder-girdles.  The breastbone and all the main bones of the body may be quite fleshless.  If the head has been left, the neck vertebrae will usually be fleshless also.  The legs and back are frequently left untouched.  If the breast-bone is still intact, small triangular pieces will have nipped out it by the peregrine’s bill.”

Okay… not the most poetic extract of
Baker’s book, but based on this observation and others over the years, a pretty fair description.

I arrived at Mud Lake early, while only a few keen wildlife photographers were prowling the paths.  I went looking first for Blanding’s turtles in the well-screened east swamp, where I’d seen them basking in previous years.  But the light was still too thin and the air too cold for basking.  Pushing my bike along the path toward the boardwalk and the main pond, I spotted a pair of black-crowned night herons pass overhead.  Chickadees flitted along beside me on the trail, until they realized that I had no sunflower seeds to feed to them.  A pair of crows chased a raven.

At the boardwalk, I hoped again to see some early basking turtles.  But no luck.  Several pairs of wood ducks swam amidst the maze of logs, broken branches and downed trees in the swamp on the inside of the boardwalk, while raucous geese squabbled over nesting sites along the shore of the pond.  As I prepared to move on, a pair of northern flickers flew up to a snag beside the swamp, checking out the cavities.  I had just resolved to leave them in peace, when I noticed a stir in the water and a tell-tale trail of bubbles.  A few minutes of patient waiting was rewarded with the sight of large snapping turtle rising from the bottom of the pond for a breath.

I slowly worked my way clockwise along the shore of Mud Lake, listening to the morning chorus.  Goldfinches chittered overhead.  A pine warbler buzzed in a tall pine.  Yellow-rumped warblers flitted and sang in the high branches.  Nuthatches and downy woodpeckers methodically moved from tree to tree, searching the trunk of each for insect morsels.  To my disappointment, I found no trace of the screech owl that had made its home in the woods the past two years.  Perhaps a little later in the spring?

Leaving my bike locked at the trailhead at Cassels Street, I walked the ridge along the river shoreline.  From one of the lookouts, I could see across Deschenes Rapids to the large gull colony at the old mill site on the far shore.  With my binoculars, I made out the larger, white silhouettes of several great egrets perched amidst the gulls.  At the south end of the ridge, I spent almost half an hour lingering around the conifers in hopes of getting some good photographs of the enthusiastic yellow-rumped warblers feeding in their branches with a solitary palm warbler.  While a small crowd of [other] grey-haired photographers fired off clusters of shots from a fortune of tripod-mounted, digital SLRs and long lenses, I waited for birds to come close enough for my pocket compact.

As usually happens, I’d lost track of time in the woods.  Feeling hungry, I rode up to Richmond Road to grab some lunch, after which I returned to the Ottawa River trail and continued west.  On one of the lawns at Britannia Park, someone was testing a parasail in the stiff wind.  I passed Andrew Haydon Park and followed Watt’s Creek pathway to Moodie Drive, where I crossed into the National Capital Greenbelt.  I continued following the Watt’s Creek pathway west to March Road, where I turned north to Herzberg Road and March Valley Road.

When I first came to Ottawa, more than 25 years ago, March Valley Road provided some of the best bird-watching in Ottawa, especially for hawks and owls.  It may be the last place in the City where I saw a short-eared owl, and I still catch glimpes of northern harriers over the Department of National Defence lands.  Over the years, however, development has crept ever closer.  Suburban subdivisions now lie only a few hundred meters distant, kept at bay only by the restrictions placed around the Department of National Defence firing range.  However, it still offers a few good vistas across the fields of the base toward the silver maple swamps shielding Shirley’s Bay and the Ottawa Duck Club properties, including a distant view of Ottawa’s only active bald eagle nest.  On this day, tree swallows filled the air above Shirley’s Brook, and the clean white head of an adult bald eagle rose above the rim of its nest.

Having ridden to within a few minutes of the South March Highlands and the Carp River Valley, I decided to mix pleasure with a bit of work.  I headed up Terry Fox Drive, past Old Second Line Road, and then turned my bike on to the construction access road into the KNL development property to inspect some of the perimeter fencing.

Even having witnessed the transformation of the landscape on the KNL property during this winter’s cutting, I still find the view quite stark and shocking.  Where a mature forest once stood, a expanse of stumps and scarred earth now remains.  I find little consolation in the knowledge that the destruction of this forest was ordained more than twenty years ago, and that I played my role in protecting what remains.  Perhaps when homes fill the landscape, families fill the homes, and neighborhood children ride the surrounding nature trails, I’ll feel better about the outcome.

After checking out the fencing and scouting a retained pond for turtles (two painted, no Blanding’s), I continued along Terry Fox Drive to the Carp River Restoration Area.  Like the KNL lands, the Carp River Restoration Area has a controversial development history.  Notwithstanding its history, the restoration looks terrific.  One of the pathways still needs completion, but the Carp has been returned to a more natural, sinuous form, and the new wetlands have been landscaped.  With the spring flood only just having dropped (now returned!), the restoration area consisted mainly of bare, brown earth and mud.  But in my mind’s eye, I could see it in the future, with the shrubs, cattails, and reeds in full growth and a cacophany of waterfowl side-slipping into the ponds.

As I was contemplating this sight, I had my best moment of the day.  While I looked out over one of the muddy ponds, a flock of six lesser yellow-legs flew across the water to land on shore at its edge.  A instant later they scattered upward as a brown, blurred shape swept through, knocking one of them down.  A peregine!  The falcon whirled tightly back around, but its first strike had not been clean; the yellow-legs was back in the air.  The peregine jinked quickly after it, but again the yellow-legs evaded, striking the water in the process.  The prospect of a possible dunking seemed to deter the peregrine, which quickly gave up the chase, and climbed away to the west and out of sight.  The whole encounter lasted only a few seconds.  In my excitement, I hadn’t even thought of reaching for my camera — not that I could have captured anything at that range.

I waited awhile to see if either the yellow-legs or the peregrine would return.  But apart from some mallards and geese, my only sighting of interest was a white-tailed deer in a thicket swamp on the far side of the river.

With the sun now sliding steadily downward, I reluctantly turned my bicycle back towards home.  Heading along Campeau Drive, I detoured quickly into the Kanata Centre Woods, where a short pathway winds over a pretty rock knoll and past a lovely, hidden pond.  The pond seemed very quiet in the late afternoon, made more so by the song of a solitary Cardinal in the trees across the water.

Reaching March Road, I cycled back to the Watts Creek pathway and retraced my route toward downtown.  By the time that I reached Britannia, however, I was ready for a refreshment.  I’d spotted the “Beachconers Microcremery” in the morning, beside the cycle path.  Stopping now, with my muscles weary and my throat dry, I enjoyed what must be Ottawa’s best vanilla bean ice cream — or so it seemed at that moment.

I arrived home just after sunset, wheeling up to the back door to see Sue through the window, sitting at the kitchen table.  After a welcome supper, I then soothed my muscles and joints with a hot bath.  Altogether, a very satisfying day.