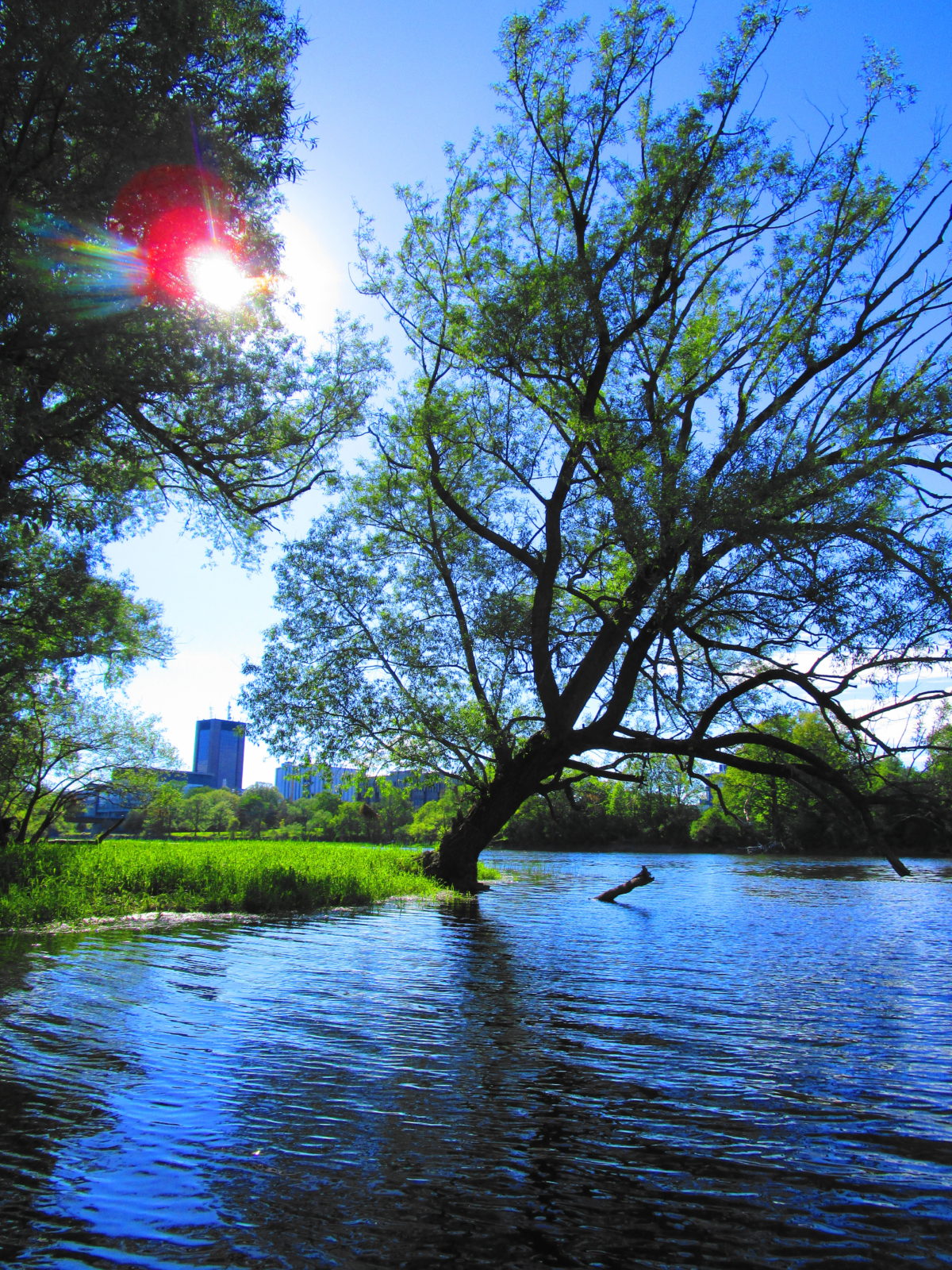 I never tire of paddling the Rideau River, especially the familiar section between Sandy Hill and Carleton University.  I always find something to admire.  I always reflect upon the human experience of the River, which still evolves, and which goes back at least 4000 years.

On a gorgeous Saturday afternoon, while many of my friends participated in the Ottawa Race Weekend, I launched my canoe for the season’s first paddle on the Rideau.  I usually make this excursion earlier in the spring, but this year’s high flows kept me off the river.  Loading my canoe on the bike trailer, I rode down to Robinson Park, launched from the beach, and turned upstream.

The paddling proved relatively easy, despite the strong current.  I passed under the Queensway and the footbridge, skirting the shoreline and reeds in search of wildlife.  My new cherrywood paddle (a birthday gift from Sue) felt good in my hands, and the tensions of the past work week eased out of my shoulders.

Given the warmth of the day, I expected to see a lot of basking turtles.  In the past, I’ve spotted large numbers of painted turtles, plus large snappers and even map turtles along the shore.  Surprisingly, in almost six hours on the river, I only found two painted turtles up on logs, along with three snappers idling in the shallows amidst the reeds.  The Ministry of Natural Resources and Forestry has several old records of Blanding’s turtle along the river, and despite a decade of disappointment, I still live in hope of finding one sometime on this stretch.

The hardest paddling of the day came at Billing’s Bridge, where the river flowed fast through the piers.  Passing a small group of stand-up paddleboarders, I tried first for the central span, paddling hard in the eddy behind a pier and then shooting into the current.  For a minute a two I held my own, but without making headway.  Finally, I dropped back and moved to the next span south, where the current proved a little less challenging.  One of the paddleboarders tried to follow me, but couldn’t muster enough speed.  Just upstream of the bridge, several more stand-up paddleboarders practiced in the calmer pool.  One of them, a very pretty young woman, struck yoga poses on her board, as her girlfriend snapped photographs.

After working slowly through the riffles above Billings Bridge, I slid my canoe into the reeds at Clifford Allen Island, so that I could renew my sunscreen.  As I slathered on the cream, with a pair of geese eyeing me warily, I noticed a newly molted dragonfly drying its wings at the tip of broken, brown reed, still hanging from its discarded nymph skin.  It’s colors had not yet fully developed, but the stripes on the thorax suggested some kind of darner.  I had seen pretty, green darners dancing over the reeds during my paddle upstream, but they lacked the thorax stripes.

Carrying on from the island, I paddled past Brewer Park to the Dunbar Bridge.  This part of the Rideau River hosts the most fascinating juxtaposition of culture in the City:  literally 4000 years of history separated by barely 300 metres of river.  On the north shore, nestled under the Dunbar Bridge, the House of PainT provides a venue for Ottawa’s hip-hop community, featuring its first legal graffiti wall and regular street dance festivals.  Just upstream and across the river, on the south shore at Vincent Massey Park, lies a 4000 year-old, indigenous archaeology site.  Excavated by the National Capital Commission over several years, the site marks the bottom end of an old portage around the Hogsback Falls.  Paddling up the south shore in late afternoon, just below the rapids under the O-Train line, one can easily imagine those Early Woodland people pulling their canoes into shore to set camp for the night, perhaps casting their nets into the river, where fishermen cast their lines today.  I suspect that they chose the spot as much for its beauty as for its convenience.

I turned back downstream in late afternoon, alternating drifting and paddling gently.  For awhile, I watched two jets circling over the City in formation as part of the race weekend celebrations.  Gradually, as the light mellowed, the wildlife became a bit more active.  Just above Billings Bridge, a female mallard shepherded her large brood of ducklings.  I could not help but think of the large muskellunge known from the area, and wonder how many ducklings would survive the summer.  Further downstream, a muskrat plied the shoreline in the shadows of the trees.  Finally, near the end of the paddle, I came upon a mink feeding on the carcass of a carp at the edge of the shore.  I shot a few, quick photographs, then circled back to take a few more, only to see the mink slip back into the shadow of the trees.

I pulled back into Robinson Park, just as the evening sun was dropping behind the City.  I looked down the peaceful waterway to the Adawe Crossing at Strathcona Park.  The serenity of the scene encapsulated the beautiful dichotomy of this wonderful urban river.